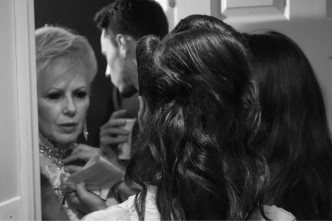 Donna also performed a staged reading at The Actors Studio of Carlos Jerome’s play, One for the Books in the role of Ruth. She also portrayed Laurie in a staged reading of the play Just Stuff by Alan Lefcowitz. Earlier, she performed in two Off-Broadway productions at  The Equity Library Theatre in NYC; Gigi as Liane D’Exelman, starring Robert Cuccioli, and directed by Gerard Alessandrini of Forbidden Broadway fame, and Annie Get Your Gun directed by Susan Schulman.

Donna belongs to the professional Acting unions Actors Equity and SAG-AFTRA She trained as an actor in a two year Meisner Technique program at the Gately-Poole Studios in NYC, as well as with Michael Howard at the Michael Howard studio also in NYC. Her Singing training includes several top professional New York Instructors, and she is currently studying wit Laura Menard, whose students include many Broadway professionals.

As a performer, Donna has a unique and diverse background. She began her career as a dancer apprenticing a professional Modern Dance Company, after having studied the genres of Graham, Limon, and Cunningham. She is also a NYC trained professional Jazz and Theatre Dance dancer.

She performed for over 2 years in New York City, Curacao, and Montreal, in The Latin Nightclub Revue - Latinissima!, a company produced by, and starring, the famous dance team Augie and Margo.

Following her dance background to a logical conclusion, Donna enjoyed a very successful career as a Professional Dance Instructor, Competitor, Judge, and Master of Ceremonies. Here she specialized in West Coast Swing, as well as Lindy, Hustle, Night Club 2-Step, and Country 2-Step.